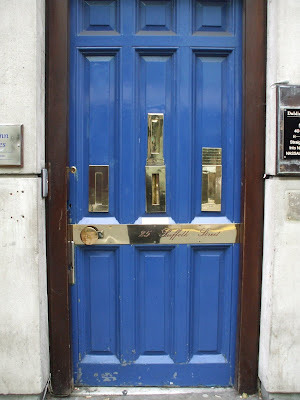 I've heard different stories, more or less accurate about Dublin Doors.
Some say that when Ireland was still under British "supervision" and the Queen died ( Queen Victoria or Elizabeth I ) the Dubliners were ordered to colour the doors of their houses in black to mourn.
As a sign of rebellion against the British, they coloured them in the most diverse and bright colours.
Other people say that the doors were painted by Irish wives, so that their husbands couldn't miss the entrance of their own house.
Whatever the historic truth, they belong to Irish Landmarks.
Publicat de Kristalpost

Both stories are great! :-)
Nice shot!

Thanks.
Which do you think it's the true one ?

Kristalpost
Sometimes when you visit foreign places you don't feel like a stranger. This is what has happend to me in Dublin - it made me feel like home. And I'd like to share this feeling with you.